So I went on a bit of a pre-ordering spree in the last couple of months of 2015 and January. I want to try and buy less books this year (hahaha) but now that I'm working I don't see why I shouldn't pre-order the books I really want to get my hands on! I know amazon is kind of evil in the bookworm, if I could afford to I wish I could buy all of my books from bookshops, but I do really like to pre-order stuff from amazon. Why? Because they don't charge you until they dispatch your order, so rather than spend a ridiculous amount all at once, my book buying is just as staggered throughout the year as it usually would be.

Anyway, here are the ten books I've pre-ordered this year. I also pre-ordered Stars Above, which has already arrived, and there are a few others I want to pre-order but haven't been able to yet, so these aren't the only books I'll be pre-ordering. It's most of them, though! 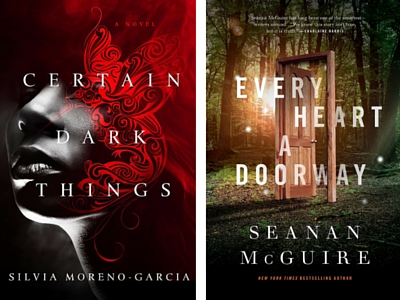 So Silvia Moreno-Garcia and Seanan McGuire (also known as Mira Grant) are releasing new books this year, and considering Signal to Noise and Feed are two of my favourite novels of all time, it's to be expected that I've already pre-ordered these two. Certain Dark Things is about vampires and drug lords in Mexico City, and it just sounds brilliant, while Every Heart a Doorway sounds like a darker and better version of Narnia. 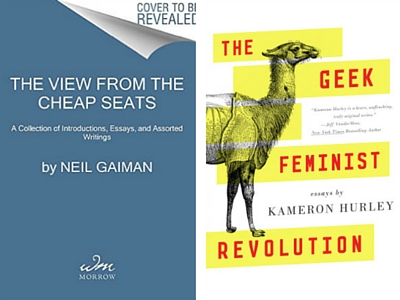 I want to continue to read more non-fiction this year, and these two sound great. Firstly, the cover of The Geek Feminist Revolution is fantastic, and it sounds like a book that's going to be right up my alley; this is probably my most anticipated non-fiction book of this year! The View from the Cheap Seats is a collection of Neil Gaiman's essays, and considering Neil Gaiman is one of my favourite writers I'm looking forward to reading some of his non-fiction - other than Make Good Art, I haven't read any. 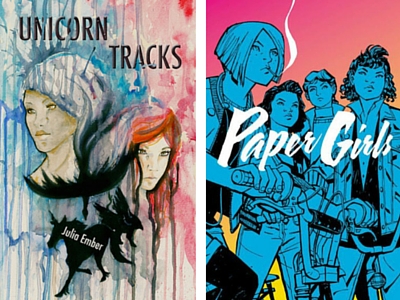 Unicorn Tracks is Julia Ember's debut novel that involves LGBT+ characters and unicorns. Naturally I've been ancticipating it for a while, and I can't wait to get my hands on my copy of it! Paper Girls is the first volume of a new series written by Brian K. Vaughan, the writer behind Saga, and illustrators Cliff Chiang and Matthew Wilson. It's been described as Stand By Me meets The War of the Worlds, so I'm there! 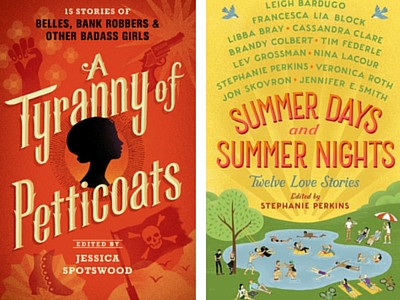 An anthology of female-led historical fiction is what awaits me in A Tyranny of Petticoats, featuring authors such as Marissa Meyer, Robin Talley and Elizabeth Wein. Needless to say, I'm excited. The last anthology I read was My True Love Gave to Me, and because I enjoyed it so much I decided I might as well go ahead and pre-order Summer Days & Summer Nights - I'm hoping there'll be a UK edition that matches my edition of My True Love Gave to Me. 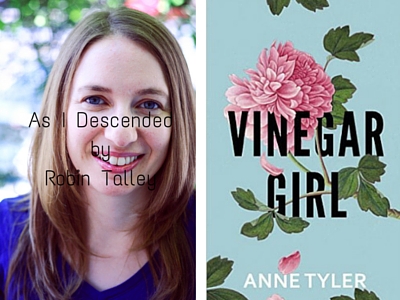 Robin Talley's As I Descended and Anne Tyler's Vinegar Girl are both Shakespeare retellings, and as 2016 commemorates 400 years since Shakespeare's death I imagine we're going to see a lot of those. I really, really enjoyed Talley's debut Lies We Tell Ourselves, so I'm really looking forward to her modern day lesbian retelling of Macbeth, and while I haven't read any Anne Tyler before I think her retelling of The Taming of the Shrew sounds wonderful.