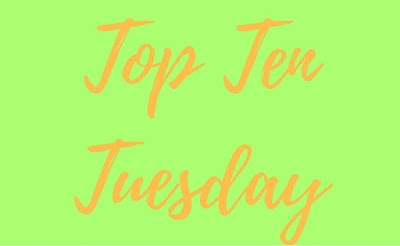 This week's theme is all about books on our Autumn TBR. I love the autumn; it's the beginning of my favourite quarter of the year, all the way up to the New Year, and today I have twenty books to share with you, split into four little TBRs. I have a general autumn TBR, which has accidentally ended up entirely being historical fiction set in the 19th century, a Halloween TBR, a Black History Month TBR and a Sci-Fi Month TBR!

In other words, this is a big pile of books I'd like to try and get through in the next couple of months! I like to try and read spooky books on the run up to Halloween, but October is also Black History Month here in the UK so I'd like to read some of the black authors on my shelves because frankly the amount of black writers I have read is abysmal. Then in November it's the return of Rinn @ Rinn Reads' Sci-Fi Month, so I have some science fiction I'd like to try and cross off my TBR, too!

I'm usually not good with TBRs, but I'm going to be as casual as I like with this one. If I only read one book from each list that'll be fine by me.

Apologies for this humungous post today, but I'd also like to take a quick moment to say a huge, heartfelt thank you to everyone who commented on my last post. I really appreciate all the lovely things you said and I feel like I'm ready to ease back into blogging!

Now on with the TBR!

His Bloody Project by Graeme Macrae Burnet: This historical novel is on this year's Man Booker shortlist and is recommended to fans of Hannah Kent's Burial Rites, which just so happens to be a novel I adore. I love reading darker stories when the autumn comes around and the story of a murder certainly sounds dark.

Sorcerer to the Crown by Zen Cho: I was supposed to read this with the lovely Mikayla @ Mikayla's Bookshelf back in February but I failed miserably. I really want to cross this book off my TBR, though!

The Wonder by Emma Donoghue: I've yet to read any Emma Donoghue despite owning  a copy of The Sealed Letter but I think her most recent novel sounds fascinating, and as it's a historical novel set in 19th century Ireland I'm hoping it'll satisfy me until the publication of Hannah Kent's The Good People in February.

The Essex Serpent by Sarah Perry: I've started this one already and enjoyed what I read so far, but I put it on hold because I think its atmosphere will make for a perfect autumn read!

The Invisible Library by Genevieve Cogman: This was a Christmas present from my friend Natalie @ A Sea Change who I know loves this series, so it's about time I got around to reading it.

Things Half in Shadow by Alan Finn: I love stories involving spiritualism, especially the spiritualism that became so popular during the 19th century, and I've owned this book for a while now. I meant to read it last Halloween and didn't get to it, so I'm hoping I can cross it off my TBR this year!

The Lifted Veil by George Eliot: Yet more Victorian spiritualism, this time written during the Victorian era by one of my favourite authors of the time. I've got a soft spot for George Eliot because it was reading Silas Marner when I was eighteen that made me realise my love for Victorian Literature. I'd never actually heard of this little novella until I stumbled upon it in an independent bookshop in Cornwall and I think it'll be something fun to read one spooky evening.

The Mist in the Mirror by Susan Hill: The lovely Mikayla @ Mikayla's Bookshelf was kind enough to send me this last Christmas when she discovered my love for Victorian era ghost stories. I've been saving it for Halloween and I can't wait to get to it!

The Haunted Hotel by Wilkie Collins: I actually own a copy of The Haunted Hotel on my kindle, which I picked up for free, but I couldn't resist this cool, Alfred Hitchcockian looking edition which I found in this independent bookshop in Wales. Wilkie Collins is another of my favourite classic authors (I adore The Moonstone which is thought to be the very first detective novel) so it's about time I pick up something else for his and, compared to some of his other work, this is a little shorter.

The Book of Memory by Petina Gappah: After reading Emily Urquhart's Beyond the Pale last year I've been wanting to read a novel with a person with albinism as the protagonist. I'm fascinated by stories told by characters in prison but all the ones I've read so far have been set in Europe so it'd be interesting to read a story set in Zimbabwe instead.

Red Dust Road by Jackie Kay: Jackie Kay is the current National Poet of Scotland and I've heard nothing but wonderful things about this, her memoir, which tells the story of her search for her birth parents.

Ready Player One by Ernest Cline: I think I'm the only person left who hasn't read this book, and as I've yet to hear a bad review I really want to get to it this November!

Station Eleven by Emily St. John Mandel: Yet another sci-fi book I've heard nothing but wonderful things about and still haven't read. This is one of my closest friend's favourite books so I'd like to check it out soon.

A Closed and Common Orbit by Becky Chambers: The Long Way to a Small, Angry Planet is one of my favourite novels of all time so I can't wait to get my copy of this!

Dawn by Octavia E. Butler: Octavia Butler is pretty famous for her science fiction, particularly Kindred, but I've heard some amazing things about Dawn that really make me want to read it this November.

Binti by Nnedi Okorafor: Nnedi Okorafor is another author whose work I keep meaning to read, and considering this little novella won a Hugo and a Nebula Award this year I think it's time I read it!

Which books made your list this week?
Posted by Jess @ Jessticulates at 08:00 12 comments: