Review | The Only Woman in the Room by Eileen Pollack 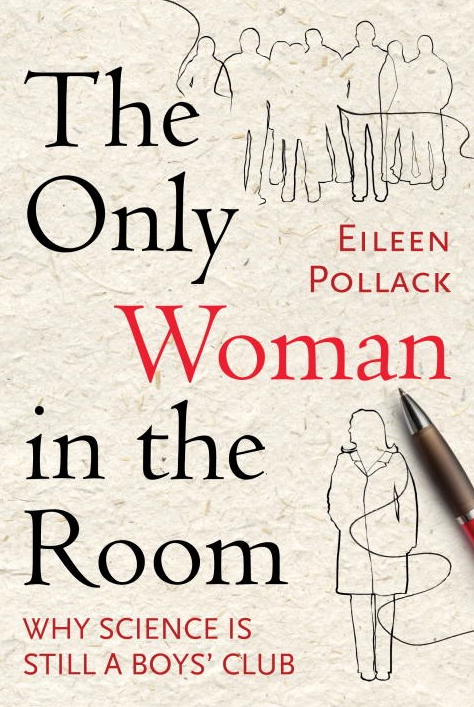 The Only Woman in the Room: Why Science is Still a Boys' Club
by Eileen Pollack

In 2005, when Lawrence Summers, then president of Harvard, asked why so few women, even today, achieve tenured positions in the hard sciences, Eileen Pollack set out to find the answer. A successful fiction writer, Pollack had grown up in the 1960s and ’70s dreaming of a career as a theoretical astrophysicist. Denied the chance to take advanced courses in science and math, she nonetheless made her way to Yale. There, despite finding herself far behind the men in her classes, she went on to graduate summa cum laude, with honors, as one of the university’s first two women to earn a bachelor of science degree in physics. And yet, isolated, lacking in confidence, starved for encouragement, she abandoned her ambition to become a physicist.
Years later, spurred by the suggestion that innate differences in scientific and mathematical aptitude might account for the dearth of tenured female faculty at Summer’s institution, Pollack thought back on her own experiences and wondered what, if anything, had changed in the intervening decades.
Based on six years interviewing her former teachers and classmates, as well as dozens of other women who had dropped out before completing their degrees in science or found their careers less rewarding than they had hoped, The Only Woman in the Room is a bracingly honest, no-holds-barred examination of the social, interpersonal, and institutional barriers confronting women—and minorities—in the STEM fields. This frankly personal and informed book reflects on women’s experiences in a way that simple data can’t, documenting not only the more blatant bias of another era but all the subtle disincentives women in the sciences still face.
The Only Woman in the Room shows us the struggles women in the sciences have been hesitant to admit, and provides hope for changing attitudes and behaviors in ways that could bring far more women into fields in which even today they remain seriously underrepresented.

I received an eARC of The Only Woman in the Room from NetGalley in exchange for an honest review.

The first thing I feel like I must say is that I'm not a scientifically-minded person at all. I didn't enjoy science in school, and while science is something I've gotten a little more interested in as I've gotten older I'm still much more of a literature and history person. You might wonder why I requested this book in the first place if that's the case, but just because I'm not very into science myself doesn't mean I'm not aware of the stigma against women in science that still exists. Other than Marie Curie I don't remember learning about any female scientists at school, and there are so many unsung heroines of the science world; Margaret Cavendish; Ada Lovelace; Mary Anning; Barbara McClintock; Rosalind Franklin... You get the point. I already know plenty about women in literature and history who have been overlooked for their white, male counterparts, so I wanted to learn a little more about what it's like for women in the sciences.

This is a hard book to review, because there were some things I really loved and some things... not so much. An important thing to point out is that I think this book is actually quite misleading; both the title and the blurb imply that the entire book follows Eileen Pollack as she talks to women in the sciences, but that only takes up the final third of the book. The first two thirds of the book are Eileen's memoir, following her childhood, her time at university and the time in which she strayed from physics to writing. Personally I didn't mind that, I thought her memoir was really interesting, but I think it's very misleading for anyone coming to this book just for that final section, and it left the book feeling like two smaller books that had been mushed together.

I've become a lot more interested in non-fiction this year, and for the most part this is the kind of non-fiction I like - the majority of the non-fiction books I've read this year have focused on feminism, so I was glad to add this one to my list. As you can see from my rating I enjoyed it, there was a lot that reminded me of myself despite the focus on science, and I think all women could read this and relate to some of Pollack's experiences.

However, I think I could have given this book five stars if it weren't for a few things that just grated on me.

Firstly, I felt as though Pollack had a tendency to perpetuate some of the negative stereotypes that often work against women who want to work in the sciences. More than once she admits to only remembering the professors she had a crush on, and something about that really annoyed me. I think it's only natural for people to develop crushes on their teachers or professors, though I must admit that never happened to me, but Pollack seemed to have an obsession with potential romantic partners. When interviewing some other scientists she often asked them if they were married or in serious relationships, and while I could understand the question's relevance to the idea that a woman can't be a scientist and a wife, it felt as though we'd stepped back fifty years.

Quite often Pollack openly admitted her outright jealousy towards other women in science who had been able to do what she hadn't by working in science, and while I think it's very brave of her to openly admit that jealousy and there's the whole problem of internal misogyny that, as women, we must continue to fight against, it sometimes felt as though Pollack wanted to be the only woman in the room. She wanted to be told she was special, whether she was a scientist or a writer, and as much as I think there's a part of all of us that wants that, I don't think it's fair of Pollack to hold other women's success against them. When women in the sciences are already struggling, there's no room for girl hate.

One other thing that annoyed me quite a bit was Pollack's insinuation that women who decided to pursue the arts instead of the sciences were 'cheating'. Firstly, I think that's very hypocritical coming from a woman who now makes her living as a writer, and secondly, the arts aren't an easy fallback; I didn't pursue English Literature at university because I couldn't make it as an astronaut. I do agree that a lot more women need to be encouraged to pursue the sciences if they enjoy it or they have an aptitude for it, but I didn't like the insinuation that the arts is full of women who'd rather be doing science.

I do think this is worth reading. I know my review seems very negative, but please keep my rating in mind - there was so much in here that spoke to me and I enjoyed reading it, for the most part, I just had a lot of thoughts about the stuff I didn't like so much.
Posted by Jess @ Jessticulates at 09:16