Review | Even White Trash Zombies Get the Blues by Diana Rowland 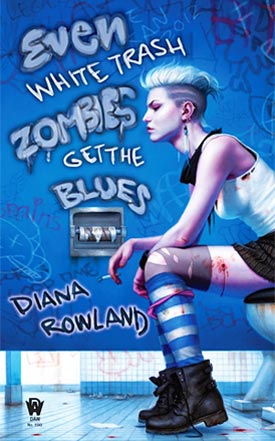 Even White Trash Zombies Get the Blues
by Diana Rowland

Angel Crawford is finally starting to get used to life as a brain-eating zombie, but her problems are far from over. Her felony record is coming back to haunt her, more zombie hunters are popping up, and she’s beginning to wonder if her hunky cop-boyfriend is involved with the zombie mafia. Yeah, that’s right--the zombie mafia.

Throw in a secret lab and a lot of conspiracy, and Angel’s going to need all of her brainpower--and maybe a brain smoothie as well--in order to get through it without falling apart.

You can find my review for the first book in this series, My Life as a White Trash Zombie, here!

After finishing the first book in the White Trash Zombie series earlier this month I just had to jump straight into the second one. What can I say? This series is addictive because it's so much fun; it doesn't shy away from the inherent ridiculousness we often associate with zombie stories - especially those budget zombie movies that make us wonder how they ever got made in the first place - and yet Rowland fills her take on zombies with such endearing characters and tongue-in-cheek wit that it's impossible not to enjoy these novels even when they border on the bizarre.

Even White Trash Zombies Get the Blues basically takes off immediately from where My Life as a White Trash Zombie left off. A couple of weeks have passed, but nothing more, and we see Angel still enjoying the new, better life she had to die to achieve. But hey, why get frustrated with being undead when you can just chow down on brains and carry on as normal?

Soon enough, however, it's clear that Angel's in for a rough ride. She's held up at gunpoint at work and barely anyone believes her, she meets her new boyfriend's uncle who turns out to have a huge stick up his ass, only made worse when she discovers her boyfriend will do pretty much anything he says; including pretending that the two of them aren't dating, and somewhere out there the person who's been chopping heads off zombies may still be after them.

And to top it all off, Angel only has a few weeks to study for and take her GED or she'll find herself in prison.

I didn't enjoy this book quite as much as the first one, mainly because I've grown very fond of Angel and I was frustrated with all the crap she was being put through. Having said that, I did love that she didn't just lie down and take it; whenever someone called her a liar she put them straight, and whenever Marcus started acting like his uncle's pet she called him out on it. Angel doesn't take any shit, and I love that about her.

I still recommend this series, whether you're a hardened zombie fan or you're a newbie to the genre, and I can't wait to read the others!