Review | The Earl and the Fairy, Vol.1 by Mizue Tani and Ayuko 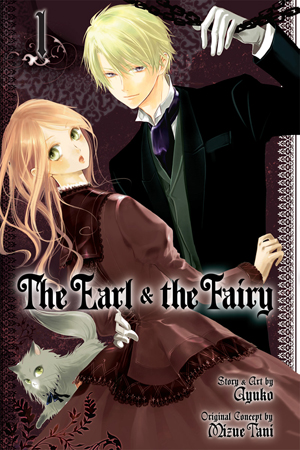 The Earl and the Fairy, Vol.1
by Mizue Tani and Ayuko

Lydia Carlton is a fairy doctor, one of the few people with the ability to see the magical creatures who share our world. During one of her rare trips to London to visit her father, Lydia’s quiet life is suddenly transformed when she is rescued from kidnappers by a mysterious young man! Edgar Ashenbert claims to be descended from the human ruler of the fairy kingdom, and he urgently needs Lydia’s help to find and claim his birthright, the legendary sword of the Blue Knight Earl. Things will never be the same for Lydia as she is pulled into a dangerous quest against dark forces!

This book is a difficult one for me to review because I am by no means a manga expert; I'm much more likely to watch anime than I am to read manga, and sadly I rarely watch anime nowadays. Of course Inuyasha and Fruits Basket will always have a special place in my heart.

I picked this book up in WHSmith on a whim; the art is very pretty, and the story sounded cute. This is technically historical fiction as it's set in 19th century Britain, but it's historical fiction with a fantastical twist - my favourite kind!

Lydia Carlton is a fairy doctor. She's someone who specialises in fairies, she can see them unlike most people, and she helps people who are having problems with them; if someone has some pesky pixies digging up their hydrangeas then Lydia's the person to call! But Lydia's always been something of a laughing stock among her contemporaries, as she lives in a world that's stopped believing in fairies for the most part.

Edgar Ashenburt, a gentleman, is one such sceptic. However, he needs Lydia's help to find the sword of the Blue Knight Earl, as he claims to be descended from the human ruler of the Fairy Kingdom. But he also looks a lot like a man who's been murdering people in America...

I didn't quite know how to rate this book when I finished it. I eventually settled on 3 stars because it's very cute; if you're a fan of mangas which have heroines so sweet they'll give you diabetes then you'll enjoy this. I also loved the idea. Not only did I find the idea of a fairy doctor adorable, but I was intrigued by the concept of the Fairy Kingdom belonging to a man who doesn't believe in fairies, but perhaps wants to. There's a lot of character depth and growth to be had with someone like that.

But character depth and growth is not what I got. The two leads are very stereotypical characters; in fact they felt more like caricatures than people. I finished the volume feeling like nothing had happened, and given that this manga is only 4 volumes long in total I expected each volume to be packed with detail.

So it's a whimsical, cute little book, but it's nothing special. When I started writing this review I couldn't even remember the main characters' names, so I very much doubt I'm going to continue with the series unless I find the other volumes very cheap.