Review | Riddle of the Runes by Janina Ramirez 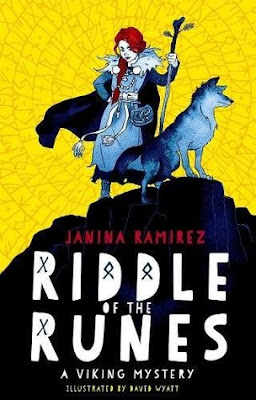 Riddle of the Runes
by Janina Ramirez

Alva rushes through the trees in the dead of night with her sniffer wolf, Fen. Being out alone when there's a kidnapper on the loose is reckless, but if she ever wants to be an investigator like her Uncle Magnus, she'll need to be first to the crime scene. But what Alva discovers raises more questions than it answers, drawing her into a dangerous search for truth, and for treasure.

I received a copy of Riddle of the Runes from Oxford University Press in exchange for an honest review.

I'm a big fan of Janina Ramirez, she's such an enthusiastic historian and her documentaries are always excellent, so when I heard she'd turned her hand to fiction to take the fun and fascination of history to a younger audience I knew I had to see for myself what it was like. I got in touch with Oxford University Press and they very kindly sent a copy out to me to review.

Riddle of the Runes is set in the 8th century, I believe in Denmark, and follows twelve year old Alva who longs to solve mysteries like her Uncle Magnus. In her Viking community justice can be brutal, but Alva's uncle preaches a justice system that involves seeking clues and proof, even if it goes against what appears to be a sign from one of the Norse gods, and Alva is eager to learn from her uncle in her beloved father's absence. When some mysterious Englishmen appear, claiming to have lost precious treasure that seems to have ties to Alva's missing father, only to then go missing themselves, it's up to Alva and her uncle to solve the mystery.

More than anything this book is a fantastic introduction to the Viking era, particularly for children (though I imagine a lot of adults could learn a thing or two, too) and I appreciated that while Ramirez didn't shy away from how brutal these communities could be, she didn't look at them through the eyes of someone from the 21st century who would consider them brutal. We see this community and culture through Alva's eyes, it's her community and her culture, so while it's very different to how we live now it's never treated as wrong or degraded in any way. I could see this book sparking a real interest in this era of history for a lot of children, and I hope schools up and down the country put it in their libraries.

Having said that I do think Ramirez is still finding her feet as a novelist, which is to be expected when this is her debut. Teaching children a lesson or encouraging their interest in history is brilliant, but I think there were times when the writing and the story suffered so Ramirez could fit in a fact; she's still learning how to balance the fact with the fiction.

My only real complaint would be that I would have liked more of Alva's mother, Brianna. I thought it was strange that she was referred to as Brianna throughout the novel when, though it is in third person, the story is from Alva's point of view. She referred to her as 'mother' when she spoke, so why not refer to her as 'mother' in the description, too? Children aren't idiots, they'd be able to figure out who she was - especially as there's a character list with accompanying illustrations at the beginning of the book, so they wouldn't be confused if Alva referred to her as 'mother' while Magnus called her by her name.

I was also surprised to discover that Alva's mother was Irish, thus Alva's red hair, and that she was once an Irish princess who left Ireland to be with Alva's father. I understand this is a children's book and I'm probably just being a history snob, but I guess we're just going to gloss over the fact that many Irish princesses were taken as slaves against their will during this era? Alva's mother and father clearly love each other so there doesn't seem to be anything sinister going on, but I'm surprised this was a choice Ramirez chose to make to perhaps bring up the Vikings' ties to Ireland.

All that aside, this is a very sweet debut with a lot of heart. Ramirez is clearly passionate about her subject and I look forward to seeing what Alva does next.
Posted by Jess @ Jessticulates at 13:29