Review | Mistress of the Art of Death by Ariana Franklin 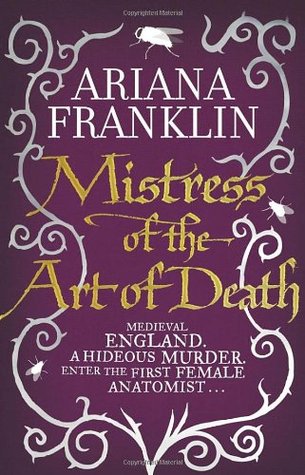 Mistress of the Art of Death
by Ariana Franklin

Adelia Aguilar is a rare thing in medieval Europe - a woman who has trained as a doctor. Her speciality is the study of corpses, a skill that must be concealed if she is to avoid accusations of witchcraft.

But in Cambridge a child has been murdered, others are disappearing, and King Henry has called upon a renowned Italian investigator to find the killer - fast.

What the king gets is Adelia, his very own Mistress of the Art of Death.

The investigation takes Adelia deep into Cambridge; its castle and convents, and streets teeming with life. And it is here that she attracts the attention of a murderer who is prepared to kill again...

It's no secret that I love a bit of historical crime, but if there's one thing the genre's lacking it's leading ladies. Enter Adelia Aguilar.

When it comes to historical fiction I rarely venture into stories set before the sixteenth century; while I find certain aspects of the Wars of the Roses interesting there's far too many people involved for me to be able to keep track of everyone, and my knowledge of the Middle Ages is very limited so historical fiction set in that period doesn't attract me in the same way a book set during the reign of Henry VIII does. As such I couldn't be certain what was and wasn't historically accurate while reading Mistress of the Art of Death, but that's not the book's fault and I tried not to let it bother me. Ultimately there's no way to enjoy historical fiction if you don't suspend your disbelief a little - after all, none of us were there in the Middle Ages, so how are we really to know what was accurate in the first place? - and I'm a big believer in the power historical fiction has to encourage readers to learn more about history.

That being said, I did feel as though it was obvious this book had been written by a 21st century woman. I know that's a strange thing to say because, obviously, it hasn't been written by a medieval woman, but I didn't feel completely engrossed in the Middle Ages like I was hoping to be. Some of Franklin's descriptions are wonderful and she was clearly a woman who was very passionate about this period of history, but every now and then Adelia said something that was a little jarring and a little too modern. I hate to say that because I am all for more women with agency in historical fiction, particularly pre-suffragette historical fiction, but we must be able to give women in history agency without making them feel like 21st century women in period costumes.

Where Franklin excelled in this novel was with her side characters. Adelia has a charming array of companions who grew on me very quickly, and I thought her characterisation of Henry II was fantastic. Writing a monarch is a difficult thing to do but Franklin wrote Henry II the way I imagined him. Sadly, it was Adelia herself and her love interest whom I had more of a problem with.

Considering this is marketed as a historical crime book first and foremost, the romance took over way too much for my liking and seemed to come out of nowhere. I actually liked the two characters together, there were moments when they had great chemistry, but they seemed to go from distrust to love/lust very quickly and it all got a tad Mills and Boon to the point where Adelia's relationship appeared to be the main focus of the plot rather than her skills as the Middle Ages' answer to Sherlock Holmes.

I was also a little disappointed that I guessed who the killer was fairly early on. There were enough potential culprits to keep me guessing, just in case I was wrong, but the feeling that I had around half-way through the novel ultimately proved to be correct and it was a shame; I like to be surprised.

Mistress of the Art of Death isn't the best historical crime has to offer - the beginning isn't written particularly well, jumping from perspective to perspective within the chapters so much that I almost stopped reading - but ultimately it's refreshing to read some historical crime with a female lead, and I'm hoping that Adelia has paved the way for even more heroines. I'll continue with the series, if for no other reason than to find out what happens to the side characters and to see if Franklin improves as a writer, and I think this would be a good place to start if you're looking for female-led historical crime. If you're a Medieval expert, however, this book is not for you.
Posted by Jess @ Jessticulates at 10:00