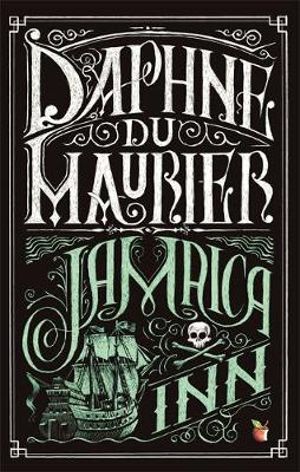 Her mother's dying request takes Mary Yellan on a sad journey across the bleak moorland of Cornwall to reach Jamaica Inn, the home of her Aunt Patience. With the coachman's warning echoing in her memory, Mary arrives at a dismal place to find Patience a changed woman, cowering from her overbearing husband, Joss Merlyn. Affected by the Inn's brooding power, Mary is thwarted in her attention to reform her aunt, and unwillingly drawn into the dark deeds of Joss and his accomplices. And, as she struggles with events beyond her control, Mary is further thrown by her feelings for a man she dare not trust...

If Daphne du Maurier had only ever written Rebecca, she'd still be a famous author now. Luckily for us, du Maurier wrote a heck of a lot!

For me du Maurier is such an easy author to read; I open a du Maurier book and I sink into the story, and Jamaica Inn was no different. Mary Yellan, like all of du Maurier's heroines I've read so far, is so present and jumps from the page. What I love about du Maurier is that she wrote so much, a lot of it historical fiction, and yet none of her work ever feels samey; The Second Mrs. de Winter, Dona St. Columb and Mary Yellan are all so separate from each other, and when pretty much everything du Maurier wrote is compared with Rebecca I love that she wrote so many different kinds of stories so it's almost impossible to directly compare any of her other work with Rebecca. (Aside, perhaps, from My Cousin Rachel, which I've heard is the closest of her novels to Rebecca).

Where Dona St. Columb is privileged and selfish and The Second Mrs. de Winter is meek and shy, Mary Yellan is a tough, salt of the earth kind of girl; she's not afraid of hard work and she's no stranger to how difficult life can be. Mary doesn't have any fantasies about falling passionately in love or becoming an advocate for woman's rights, she just wants to live in the countryside and run her own farm. But when your fate's in Daphne du Maurier's hands, you're destined for something more troublesome than farmwork.

After Mary's beloved mother dies she's sent to Bodmin Moor to live with her Aunt Patience at Jamaica Inn, but when she arrives she discovers that the bubbly, lovely woman she remembers has transformed into a woman who is constantly terrified, thanks to her brutish husband Joss Merlyn. Mary works at her uncle and aunt's inn, where no one ever stays, and soon discovers Jamaica Inn's dangerous secret, all while battling the strange attraction she feels to Joss's younger brother, Jem.

Considering Jamaica Inn was written before Rebecca, I've always thought it unfair that readers who read Rebecca first mark Jamaica Inn down because it isn't Rebecca, but now that I've read Jamaica Inn myself, having read Rebecca, I can understand their point of view a whole lot more. I didn't compare Jamaica Inn with Rebecca, they're two very different stories, but they do have similar themes; they're both fairly Gothic, with heroines in isolated places that feel like characters in their own right, and questionable love interests. In my edition of Jamaica Inn there's an introduction from historical fiction author Sarah Dunant, who claims that in Jamaica Inn it's easy to see that du Maurier was 'on her way' to Rebecca, and I'd agree with that, there's just that extra something missing from Jamaica Inn that makes Rebecca so special.

The more I think about it, the more I think the main problem I had with Jamaica Inn is that it's trying to be two different novels at once. Set in Cornwall, at the height of Cornish smuggling, there's not quite enough action to make this an adventurous, historical romp - Mary spends most of her time cooped up in Jamaica Inn or wandering alone on Bodmin Moor - but at the same time it's not quite slow-moving and atmospheric enough to be the kind of Gothic novel that Rebecca is. It never fully satisfies either type of story, so I couldn't fall in love with it the same way I fell in love with du Maurier's other work.

While this may be my least favourite du Maurier so far, though I still really enjoyed it, I do think Jamaica Inn has a fascinating villain. I won't say too much, I don't want to spoil it for anyone (though I have a feeling the villain is fairly obvious once you get into the book) but he was both unsettling and yet strangely enticing. In fact the villain may have been my favourite character in the book, because while Mary is written very well, as are Jem, Joss and Patience, she just didn't capture me quite as much as the villain did.

As I said above Mary is very different from the other du Maurier heroines I've met, and that I did really appreciate; both Dona and The Second Mrs. de Winter are romantic people, in very different ways, and while Mary does experience a romance of her own it's very different to the other du Maurier books I've read. Mary thinks about romance in the same way she thinks about animals on the farm - at some point it's natural for them to gravitate towards a member of the opposite sex, even produce offspring, but it's not something they think passionately about, if they think about it at all. I found it really refreshing to meet a heroine who was written in the '30s who has such a casual, practical opinion of relationships.

Ultimately Jamaica Inn is well-written, easy to read and a lot of fun, as well as being sinister in places, and I did enjoy it. If you ever find yourself stranded on Bodmin Moor, this would be the perfect book to have with you!
Posted by Jess @ Jessticulates at 09:00