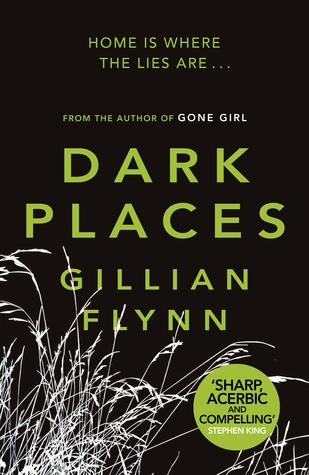 Libby Day was just seven years old when her evidence put her fifteen-year-old brother behind bars.Since then, she has been drifting. But when she is contacted by a group who are convinced of Ben's innocence, Libby starts to ask questions she never dared to before. Was the voice she heard her brother's? Ben was a misfit in their small town, but was he capable of murder? Are there secrets to uncover at the family farm or is Libby deluding herself because she wants her brother back?She begins to realise that everyone in her family had something to hide that day... especially Ben. Now, twenty-four years later, the truth is going to be even harder to find.Who did massacre the Day family?

I did it. I finally read a Gillian Flynn novel. I don't tend to read crime/thriller books that often, but whenever I do I always enjoy the process of reading them; there's something interactive about a thriller because you can come up with your own theories while you read, or, if you're like me, think of what you might do if you were in such a dire situation.

I'd been meaning to read something of Gillian Flynn's for a while, though in all honesty Gone Girl is the one novel of hers I'm the least interested in reading. I'll probably pick it up eventually, but Dark Places and Sharp Objects appeal to me more. Then I happened to find a brand new copy of Dark Places for only £1.99, so which of her novels I was going to read first was settled.

And? Well, I have very mixed feelings about this book, so much so that I'm still not sure about my rating.

Firstly, it's no secret that Flynn likes to write about unlikable people, and I don't have a problem with that; if an unlikable character is written well then I'll still care about what happens to them, and boy is Dark Places brimming with unlikable characters. But they're also very real characters for the most part. I know some people really didn't like Libby, but I loved her; she's written so well and I could understand how she is the person she is. In fact that's something Flynn does very well; Dark Places is full of characters whose lives were changed by one little thing, a simple lie at the wrong time and shit hits the fan, as it so often does in life.

I liked how we got to see from several points of view throughout the novel. We follow Libby, and then every other chapter we follow Ben, her brother, or Patty, her mother, through the day leading up to the murders. What I loved about this was how cleverly Flynn weaved everything together, so every now and then something would happen that I realised would lead to something terrible later on and I'd find myself saying 'oh no, don't do that!' If a book can make me react like that, then it's written very well.

I really can't fault Flynn's writing. She certainly isn't afraid to explore the darker, grittier, twisted side of human nature, and she does it very well.

Unfortunately, I just wasn't a fan of the big reveal at the end. When we finally find out what happened to Libby's family, and we do find out, I thought it was just too much, bordering on the unbelievable. It's very difficult to talk about without spoiling anything, and I know a lot of people love this book so I'm probably in the minority here, but let's just say I wasn't that impressed with the outcome. For me the ending was disappointing because I felt as though it came out of the blue; a few characters made decisions that made no sense to me whatsoever, but I know some readers will love that. Ultimately it's all subjective!

I'd quite like to check out the film adaptation, especially as it has the brilliant Charlize Theron in the starring role, and I'm definitely interested in checking out more of Flynn's work; I'm still not that interested in Gone Girl, but I'd like to read Sharp Objects at some point because I've heard it described as having elements of the Southern Gothic to it, and I love me a bit of Southern Gothic. Plus Flynn will be writing a retelling of Hamlet for the Hogarth Shakespeare series which should be a lot of fun.

I didn't love Dark Places, but I did enjoy reading it and I would recommend it. If you have a strong stomach.
Posted by Jess @ Jessticulates at 11:00